I have never known ten days to pass so quickly. I write this on my journey back across the Atlantic to Las Vegas, my second home. I returned to the UK for the first time in nearly a year around ten days ago. After a brief visit in London to see my brother, I headed on up to Bonnie Scotland with plans of good scottish hill running, cycling through the north-east’s challenging terrain and catching up with my old Saturday swimming group; however, plans did not go quite this way. I stepped off the plane in Aberdeen to ice cold wind, snow and gales. When I asked my Mum if she could think of a good 50-60mile route to cycle the next day, her knowing giggle kind of said it all – I spent the next day (or nearly three hours of the next day) on a bike…but attached to a turbo trainer in a shed beside the garage. Home sweet home, eh. Alas, I was not about to let the weather ruin my trip home. I spent the preceding 7days driving around the Aberdeenshire countryside visiting family, catching up with friends and in a local gym. Perhaps a blessing in disguise, as I guess some good quality sleep, rest and recuperation will have done a world of good. The introduction to Gin and Tonic was perhaps slightly counter productive, but one night of drinking every so often has to be healthy – or at least a healthy reminder of how terrible it feels to be hungover, nonetheless I had a wonderful time with good friends and close family.

My return home coincided with the Garioch 10k, a local running race which last year I had won, with a PB of 39:09. Not a record breaking time or a terribly fast field but, my having been invited to race as an ‘elite’ athlete, people were asking the inevitable, “so, do you think you’ll win again?”, em, probably not but I’ll give it a good go. This might seem negative to say but the field was very strong with runners who perform sub-35minute 10k’s – something I only dream of at the moment. With doubts that the race would go ahead at all, all I could do was try to remain calm, focused, and just do my best.

Race day morning was freezing but the scottish lass in me decided to wear shorts anyway.

The ice cold wind was strong slowing down the field marginally, and making any hope of a personal best time very difficult. I ran strong, but my mind wondered throughout, my muscles froze up around 4km and the constant mental battle of time vs position flooded my concentration. I finished in 6th female in 41:16 (time a rough guess-timate as the timing chips were unavailable unexpectedly on race day). I was disappointed with both my time and my position but after a little time had passed I accepted that it just wasn’t the best race….but it also wasn’t horrible….silver lining folks, silver lining.

Having actually taken an off season, there are certainly a few things I have gained:

So, regardless of feeling like I’d had a bad race, I had to remind myself that I had not travelled home to achieve a new PB (although that would have been nice) and that what little time I had to catch up with friends and family, was too precious to spend dwelling on race results or outcomes.

This new year and new season accompanies a new me (to an extent) with a new outlook on life, a new optimism, new acceptance to things out with my control and hopefully clear eyes – that is a clear outlook, and not that I have any issues with my eyes… I have found some new training routes, new training partners that work in a little easier with my hectic schedule and what I always love….new shoes! (such a girl at heart really) 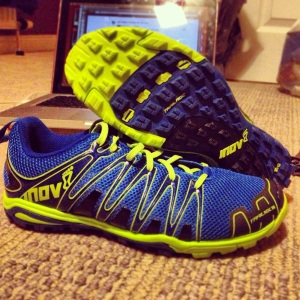