Not even 2weeks ago I received a message from AJ Mesalic via Facebook, asking me to fill a spot in their team in the Mohave Death Race. Someone had had to pull out at last minute and it was crunch time. I did a bit of research and was inundated with info about the race from AJ, and it really looked quite rediculous. 280 mile relay race across the Mohave Desert in summer, comprising 24 legs of road bike, mountain bike, road run and trail run. Being an endurance junkie and loving a good challenge I was definitely intrigued. I only had one problem: the next day was the next round of the Kenda Cup West in Big Bear, and I was so eager to gain some points in the series standing after winning my first race in Bonelli park. So I asked him. Logistically, disregarding the lack of sleep and recovery, would it be possible to finish one and be in big bear to race on Sunday… AJ seemed confident we could be finished by 5am. Providing I could ask someone to drive me to big bear and back it wAs definitely plausible… I WAS IN!

Friday night I drove to Nipton, CA where the race would begin and finish. I met my team (most of which for the first time!), AJ and Ashley who I knew through the local triathlon scene, Kas, a crazy great climber with Mcghies/Mandalay bay cycling team, Ryan and Chris who are both incredible seemingly effortless runners and Patrick a fearless mountain biker AND roadie. Our team was completed by Carrie, Kas’ wife who drove one of our vehicles, provided constant support and who spent her entire Friday creating an entire cooler full of Feedzone Portables which kept us fueled through the entire event.

After sleeping in our pretty glamorous 8 person tent, complete with noisy freight trains passing through the night I woke bleary eyed but altogether quite excited for the adventure that lay ahead. The year before the competition had been tight with only 80seconds between 1st and 2nd place! The theme of the day was to never let our ego get the better of us, never give up, keep pushing until it’s over.

The race was soon underway and the first leg runners took off at an incredible rate! We hurried to our next check points and strategised as we went: who would run support, who would get the next athlete to their next checkpoint…

By the time it came to my first leg we were in the lead. Ashley had started us off in a strong position with Kas taking the lead in the second leg. Ryan and Chris blasted through their first legs, leaving Patrick to ride like the wind to me. My first leg was an 11.6mile uphill road bike, and it was already HOT! I was warned of the several false summits that I would encounter so I kept my head down and kept grinding upward. Man, the pressure of leading with 19teams chasing you down is no joke!

The temperature was now well above 100degrees Fahrenheit and in the Mohave Desert there is no hiding from it. Kas rode the 34mile leg with an incredible amount of climbing in the heat of the day, we did what we could to support him with hydration and cooling but it was brutal! His leg was followed by an equally grueling 9mile uphill run in one straight line. Ryan took on this one and I don’t even know how he physically pushed so hard but I was in awe! Ryan handed the baton to me in my unsupported mountain bike leg and all I could do was think how hard everyone was already pushing, I couldn’t let them down now! My own goal was to try and finish the leg as much as I could before the next athlete started…I powered so hard through that bike finishing in just under 30minutes and a full 30mins at least before the next athlete could set off! At this point it would have been easy to become complacent but no one even considered this an option!

My next leg was a 7.8 mile undulating trail run. This started well, the sun was finally starting to go down and I felt like the worst was done..how wrong I was. I started to get a stitch about 5 miles in but all I could do was stop, breathe and push on. My teammates gave support from the team van and encouraged me to slow down the pace, well I couldn’t do that! Not now! I finished my leg having run at a 7 minute pace, but my stomach was flipping. I got in the car and things went from bad to worse. I couldn’t bare to eat or drink anything and I was sure this was going to be my low point in the race… And low it was.

I had a bit of time before my next and final leg. I focussed on nothing more than being still, trying to get the minimum fluid into me and of course supporting our athletes on during these dark hours. With less than 35miles left in the whole race, I was up. A 4.8 mile run in the dark along a rutted dirt road. I ran like everyone was chasing me…because they were. I ran for my teammates who had busted themselves all day long, who I had supported and who had supported me along the marvellous adventure. I ran and ran until I started to feel a pain in my side again. I drastically slowed down. The support vehicle pulled up beside me and Patrick called out to me “I hope you’re having fun! This is it! Enjoy it!” I turned to him and smiled. This guy knew how to pull me out of the darkness I slipped into and once again I was flying! I created over the hill and saw the lights of Primm, the shine of the solar panel fields and in the distance my home, Las Vegas. I threw my arms up in the air and continued flying down the hill. My elation  was met by distant cheers in the distance behind me from the support vehicle. I handed over to Ashley and my work was done. The support van pulled up next to me and we all smiled. This had been a day like no other, an adventure like no other. Starting the day barely knowing one another’s names to becoming each other’s closest support crew.

I went on to Nipton, giving Kas a vote of support on the way and went about getting ready to make a dash out of there after the finish. After all, this was still just part one.

Kas crossed the line around 2:20am. We had finished with around a 2hour lead on our competitors, but I was filled with nothing but admiration for every single participant and volunteer who made that event what it was. We all suffered and we all loved it. This is what we live for, what we thrive, the challenge…and it was beautiful! 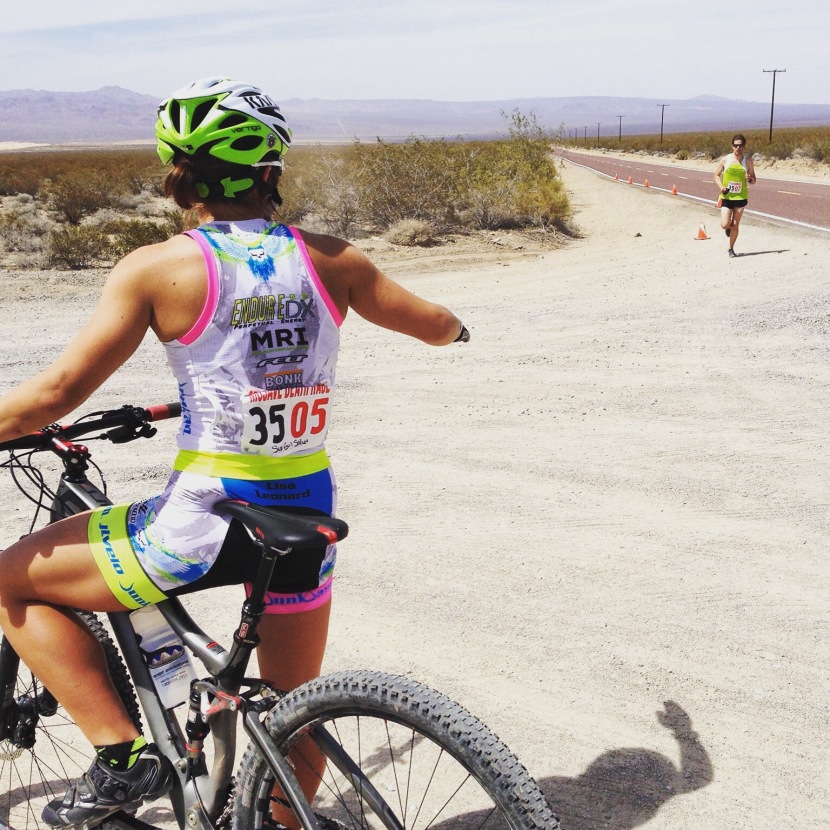 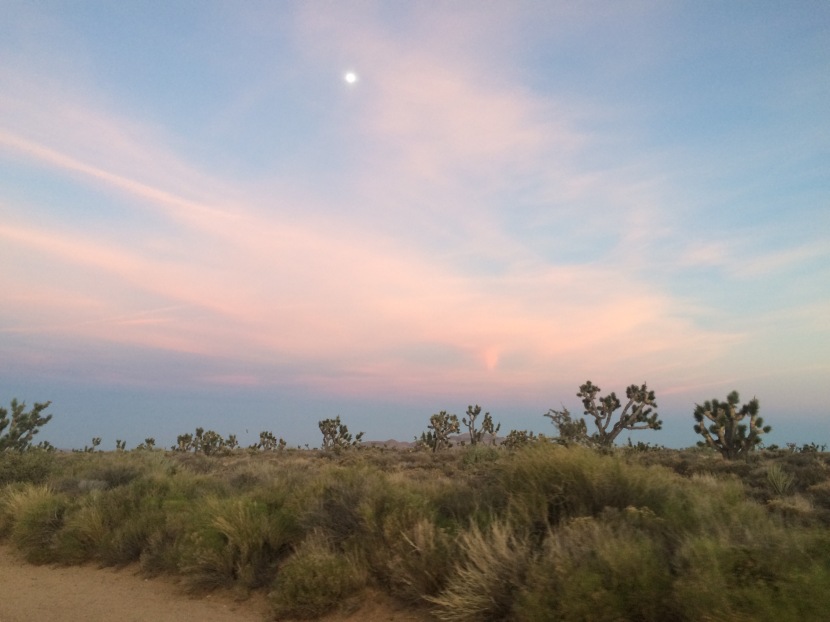 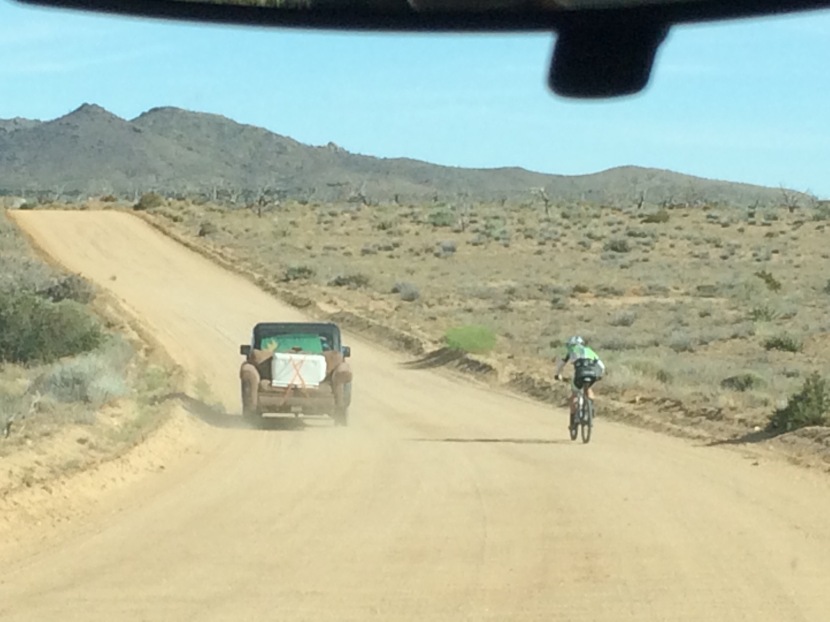